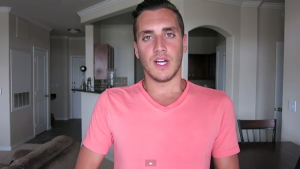 In a video for his newly launched vlog, Michael Sam’s fiancé Vito Cammisano shares his story of growing up as gay in his Italian Catholic family.

Cammisano talks about realizing he was different in first grade, admitting to his childhood priest of his “feelings for other boys,” his middle school struggles, his failed attempts at being straight in college, coming out to his best friend, and getting hit on for the first time while at a bar in Scotland.

Last week, rumors swirled that Sam and Cammisano had ended their relationship after it was reported Michael Sam had returned to the Montreal Alouettes following an abrupt trip to Texas for “personal reasons.”