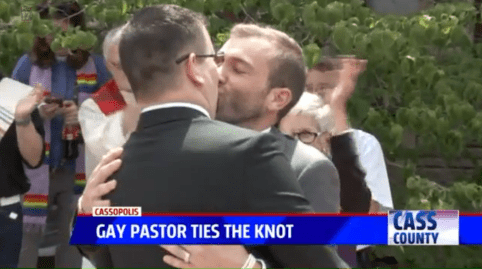 Last week, we told you about the case of the Rev. Benjamin Hutchison, who was forced to resign as pastor of a Methodist church in Michigan because he’s gay. Days later, Hutchison married his partner of five years, Monty Hutchison, in a ceremony on the steps of the county courthouse that was attended by 30 clergy members. 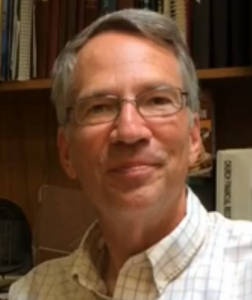 Now, nine of those clergy members are facing possible discipline from the United Methodist Church for participating in the ceremony. They are led by the Rev. Michael Tupper (right), who signed Hutchison’s marriage license.

The Rev. Michael Tupper, who signed the marriage license of Benjamin Hutchison after his wedding last Friday, said he has handed over the names of nine West Michigan pastors who pronounced Hutchison and his partner “husband and husband” to the UMC district superintendent in Kalamazoo.

Tupper said in all, about 15 of the 30 pastors present said the words, which go against the church’s doctrine that pastors cannot officiate gay weddings. Tupper said he warned the pastors before the ceremony that they could get in trouble for officiating the wedding.

“Folks were aware that it violated the book of discipline by saying those words,” Tupper said.

Tupper actually wanted more ministers to sign the marriage license in an act of defiance, but the county clerk wouldn’t allow it. Nevertheless, the complaint will now go the local bishop, who will try to work out a resolution to avoid church trials. Tupper previously was disciplined for officiating the wedding of his lesbian daughter. The Methodist church prohibits both openly gay clergy and same-sex weddings.

From The New York Daily News:

“We were all in a sense, officiants. It opened ourselves up to the possibility of being in trouble,” Rev. Michael Tupper told The News.

He could lose his clergy credentials over the stunt, but if that’s the outcome — so be it.

Tupper said he believes the Methodist church is unlikely to change its anti-gay policies at its General Conference next year, due to the influence of churches in Africa, where homosexuality isn’t accepted.
Watch a video report below.