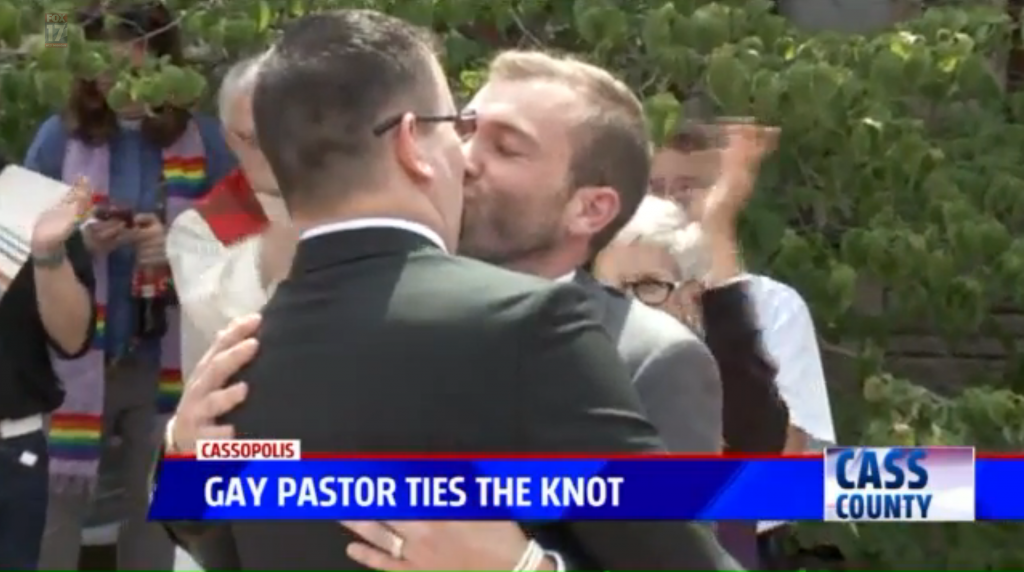 The other day we told you how a Methodist pastor in Michigan was forced to resign after church leaders found out he was gay. 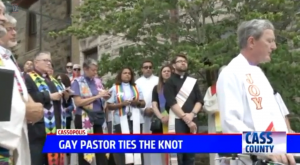 On Friday, just days after stepping down from Cassopolis United Methodist Church, the Rev. Benjamin Hutchison married his partner in a public ceremony outside the county courthouse. Thirty clergy members, many wearing rainbow-colored stoles, attended the ceremony, along with more than 100 guests. They included several members of Cassopolis UMC, where Hutchison grew the congregation since taking over in 2013 and made it financially solvent.

Hutchison called it a joyous occasion.

“Walking around the courthouse and seeing all the support, seeing all clergy there gathered standing there saying that they support it, they’re not opposed to it, it really was a blessing today.” …

Rich First, a Stevensville resident who attended Hutchison’s ceremony, credited Hutchison with pulling him out of his depression.

“I was very depressed, and one meeting with this pastor brought (me) out of depression so far that I started coming (to the church),” First said. “You would not believe the ability that this pastor has to make the whole church cry, laugh, rejoice you name it. I haven’t been to church for 30 years and one afternoon with him changed that. I knew he was gay and the church knew too.”

Hutchison also had some harsh words for the Methodist church, which prohibits “self-avowed practicing homosexuals” from serving as clergy. Church officials will again consider lifting the ban at the UMC’s General Conference in May 2016. It has remained in place largely due to the church’s growth in places like Africa, where homosexuality isn’t accepted.

He said, “The organization, yes. I would like the church structure to change their views. Mostly because as a psychotherapist I struggle with the children, as I quoted in my thesis.”

Previous Post: « ‘SNAP for Equality’ and Orbitz Might Send You on a First Class Vacation in the U.S. or Europe!
Next Post: Pastor Urges Christians to Use Guns to Fight Gay Marriage, Defend Religious Freedom: VIDEO »