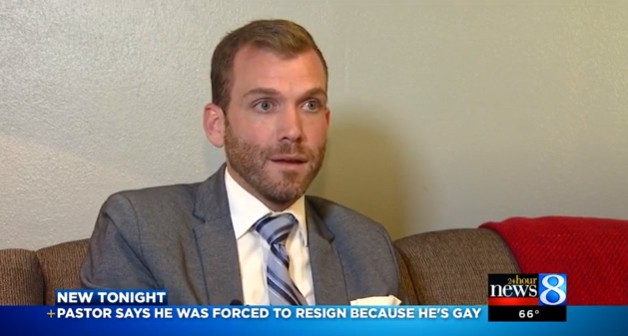 Rev. Benjamin Hutchison, a pastor at Cassopolis United Methodist Church in western Michigan who since taking over in 2013 had quadrupled the congregation and made the church financially solvent, resigned this week after church leaders discovered he is gay and said they would fire him.

Rev. John Boley of Kalamazoo, the United Methodist Church’s district superintendent, called Hutchison to a meeting, and asked him if he was gay and had a partner.

Said Hutchison to MLive: “He asked me if I did and I said yes. By that evening at 7:00 I resigned under the condition of immediate termination. If I wouldn’t have resigned, they would have fired me.”

The church’s parishioners love Hutchison and many are deciding to leave the church, WOOD reports:

Most of the church’s parishioners are now defending Hutchison. They said they have known since the start that he was gay and they don’t mind. They even posted signs and set up a display inside the church meant to symbolize their loss. Some are even leaving the church.

“I’ve taken my last step into this church and down after 70 years, and 17 people in my family are quitting also. I think this is the death knell for this church,” former parishioner Glenyce Haggin said.

Hutchison is currently engaged and plans to marry his partner Friday afternoon at the Cass County courthouse.

Watch a report from WOOD, below: