When Magic Mike opened three years ago it was something of a risky proposition. Male stars exploiting their bodies for a young male star’s dream project loosely based on his own stripping career which he felt no shame about? Who would have guessed? Cut to three years later: Magic Mike and Friends (minus The Kid and Dallas “alright alright alright”) have returned to movie theaters with much teasing and blockbuster fanfare to a relatively new pop cultural context they helped create: male objectification is increasingly the norm. Just ask Chris Pratt, the ascendant superstar of the moment (Guardians of the Galaxy, Jurassic World) who has acknowledged that his new body was key to his ascendance and that he’s all for it… the objectification.

This wondrous new world of happily exposed man-flesh makes Magic Mike XXL feel curiously demure. Usually sequels go for more-more-more but XXL (the title is a misnomer) downsizes even as the stages get larger. There’s less plot since it’s essentially a road trip movie but most curiously there’s much less nudity even if the women this time around seem a lot more eager to see it. This withholding is smart and funny at the beginning of the film in a sensational opening dance number starring Mike and Mike alone. Channing Tatum is terrific as usual and anyone still surprised by that… sashay away. Mike shakes his own helmet clad head in his work room. He can’t believe that he still has the sexually suggestive Magic moves in him — and the urge to perform them, too.

But that same withholding wears thin as the finale approaches. The new coyness is a bit puzzling since nearly the same exact team assembled for the sequel and the stars seem to have worked even harder on perfecting their physiques. Perhaps Matthew McConaughey’s Oscar-worthy exhibitionism was the key to how randy and uninhibited the first film felt? Though the Oscar-winning Steven Soderbergh famously retired from feature film directing with Magic Mike (what a film to go out on) and moved to television, his stamp is still all over the sequel. He’s the cinematographer, editor, and executive producer but he’s turned the director’s chair over to his former first assistant Gregory Jacobs.

Without the nudity, it’s a good thing Gregory and Steven have other tricks to keep our eyes glued to the screen. The best decision is to amplify the comedy and Magic Mike XXL is hilarious in ways both expected like dumb lug conversations between strippers and Tatum’s romantic comedy skills as well as entirely random like a long highly enjoyable detour to meet Andie MacDowell who completely steals a big scene (and the heart or at least the loins of Big Dick Richie himself, y’all). The filmmakers have also paid attention to careers post-2012 and Matt Bomer and Joe Mangianello both have highly welcome expanded roles. Bomer’s Ken doll is dreamier this time and put to better use as a singing stripper and Mangianello nearly steals the movie out from under Tatum (mmmm ‘under Tatum’) with XXL‘s only display of casual nudity, that big scene with MacDowell, and the film’s most riotous sequence set in a mini-mart.

That hot but languorous summer feeling of the first film carries over and while that works wonders for its shambling road movie comedy, the slow and flazéda approach is difficult to enjoy in the stripping climax, which should be the most exuberant part. Though XXL starts out like a road movie, you could argue that it turns into an old Judy Garland/Mickey Rooney style “let’s put on a show” musical in its last act… if Garland and Rooney wore sparkly speedos (sorry for the image) and were a whole lot less professional about their big numbers.

The climax is seriously lacking. Between lame long stripping routines we keep taking inexplicable breaks for Jada Pinkett Smith. A whole lot of Jada Pinkett Smith. Worse still, she’s already given this exact girl power emcee performance in the middle of the movie in an extended road trip stop along the way to the convention. Tons of screen time for Jada Pinkett Smith is not something anybody clamoring for more Magic Mike  would have asked for or expected or won’t feel slightly cheated by. Faring a lot better is Amber Heard (former lesbian, now Mrs. Johnny Depp) who plays a female stripper who “isn’t going through a boy phase” but finds herself drawn to Mike anyway.

Despite a bunch of trouble in the final act, I wouldn’t dream of telling anyone not to see the picture. It’s charming sexy fun for roughly 2/3rds of the running time which is more than a lot of summer blockbusters can claim. In one of the film’s cutest moments, Mike does a silly spin for Zoe after introducing himself as simply “Magic” and the thing is this: he really is. And so is his singular franchise.

In what other movie could a face-humping move like this actually double as a sweet romantic comedy character beat for two lonely people, and yet it does. If you don’t believe me see the picture!

As with the first film, which dropped us into a lengthy hilarious sandbar party on the Fourth of July the national holiday plays a key role again. When the light display begins, the camera wisely knows we don’t even need to look at it. Cut to a closeup of Channing Tatum’s movie star mug, eyes all lit up. Baby, he’s a firework. 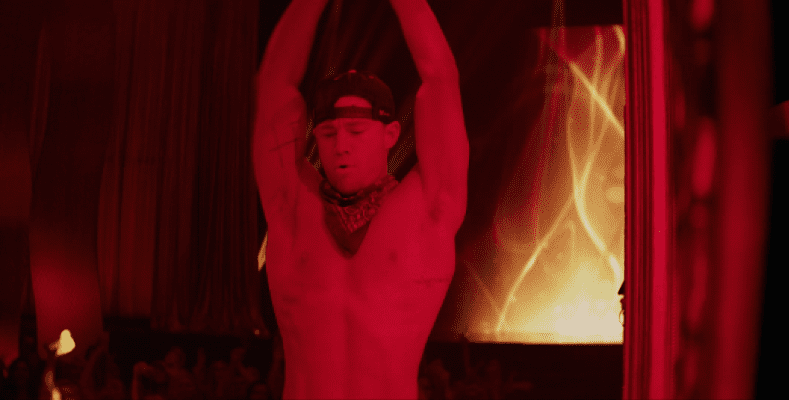