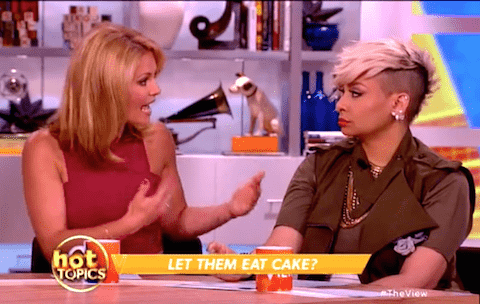 Former That’s So Raven lead and The View co-panelist Raven Symone and Candace Cameron Bure of Full House fame got into a tiff on The View regarding gay marriage as the two discussed the now infamous bakery that refused to bake a lesbian couple a wedding cake and was subsequently fined $135,000.

In the clip Bure, sister to religious anti-gay leader Kirk Cameron of Growing Pains, strongly proclaimed the bakery has the freedom of association and that the fine they were slapped with is ‘unconscionable.’ Symone, who is gay, was having none of it aiming a quick rebuttal at Bure saying, “I refuse to associate with you right now.” Watch Symone give it right back to Bure, below: