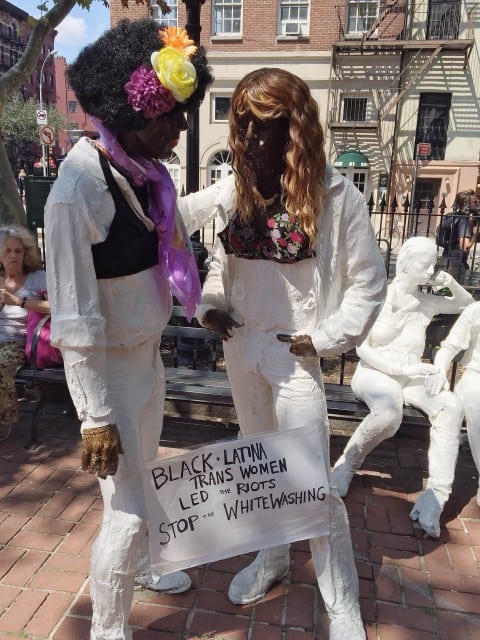 Last week we told you about Stonewall veteran and trans leader Miss Major’s criticism of the upcoming gay rights bio-pic Stonewall directed by Roland Emmerich. Major criticized the trailer for failing to reflect the full diversity that was on display at the 1969 Stonewall riots, exclaiming, “Everybody can’t be white!”

Now two activists have taken Major’s words as a clarion call to arms and decided to paint the famed Christopher Street Gay Liberation sculpture in NYC brown in protest of what they see as the whitewashing of LGBTQ history. 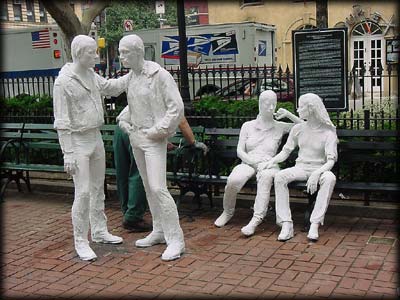 The monument was commissioned by an arts patron in 1980 and sculpted by George Segal who had just completed a commission to commemorate the Kent State shootings. Segal was known for creating bronze works that he often painted white to resemble the plaster molds he created at the outset of his process.

The two activists, though anonymous, identified themselves as “queer and gender non-conforming women in their 20s, one white and one a Latina immigrant, living in Brooklyn” to Auto Straddle. The two also spoke with Auto Straddle about their decision to paint the statues:

AS: Why did you decide to paint and dress the statues?

Those sculptures are supposedly there to commemorate the Stonewall riots, but there isn’t a trace of the actual riots in them. They’re a slap across the face to the Black and Latina trans women who got whacked with batons and shoved into police vans, and still had the guts to continue to lead the fight for LGBTQ liberation. I mean, the people who modeled for the sculptures weren’t even at the riots! That’s just a straight-up insult. It’s also important to note that the Mildred Andrews Fund paid a (presumably) straight and cis white man $90,000 to depict gay people. It’s no wonder that the sculptures are so impassive and tone-deaf.

We painted them because Marsha P. Johnson, Sylvia Rivera, Miss Major, Storme DeLarverie and all the other Black and Brown people who led the movement deserve credit for their courage and strength. What we did was rectification, not vandalism. Those statues are bronze (brown) underneath the layer of white paint — the symbolism behind that is infuriating. I know that some people are going to be angry, but I’m not concerned with preserving bullshit art. I’m angry about the whitewashing of LGBTQ history.

AS: Why is it important to you to center trans people and people of color in conversations about queer and trans liberation?

We’ve got to keep talking about the 16 trans women have been murdered this year, and Black Lives Matter, and police brutality, and immigration. And the respectability politics have got to stop! It’s insane that gays booed Sylvia Rivera 42 years ago, and just did the same thing to Jennicet Gutiérrez a few months ago. Voices like hers are the ones that need to be amplified the most. It’s not liberation if it’s not intersectional.

The statues have reportedly already been re-painted to cover the work of the anonymous activists.

.@gaydadproject @autostraddle You'll be "happy" to know it's already been whitewashed again. pic.twitter.com/0M4v8ImtB3

You can read the rest of the interview with the activists HERE.

Watch a video showing the painted statues below: