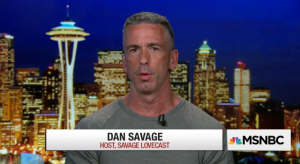 Speaking with MSNBC’s Chris Hayes last night in a segment on the Ashley Madison hack, sex advice columnist Dan Savage shared why he has sympathy for the victims of the privacy breach but not career homophobe Josh Duggar.

“Josh Duggar is not a private citizen. He is a public figure who has benefited politically and financially from attacking other people for their marriages, for their sex lives, for how they conduct themselves, for their alleged in his opinion “immorality.” And so his morality is germane and his hypocrisy makes him in this instance a legitimate target of an outing of this sort.”

Related, Josh Duggar Responds to Cheating Allegations: ‘I Have Been the Biggest Hypocrite Ever’ – UPDATED

Savage also elaborated on his thoughts on the eldest Duggar son in a blog post over at The Stranger:

Josh is a mess, thanks to his parents, a sad man torn between what he was both programmed to believe about sex (and imaginary friends) and the actual sex (and the actual friends) he wanted to have.

In related news, a source close to the Duggar family told People magazine that Josh’s wife Anna will likely not be leaving her husband, instead “turning more to her faith than ever” and possibly even trying to absorb some of Josh’s blame.

Previous Post: « One Direction is One Man Down in NASA-Themed ‘Drag Me Down’ Music Video – WATCH
Next Post: Evangelical Producer Has ‘Audacity’ To Promote Anti-Gay Film With Rainbow-Colored Banners: VIDEO »