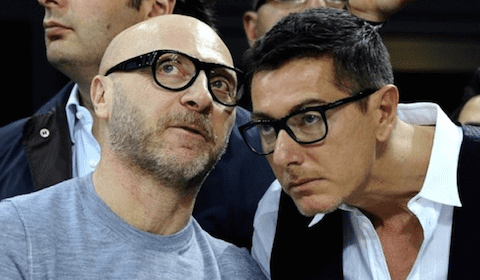 Fashion maestros Domenico Dolce and Stefano Gabbana, who once called in vitro fertilization babies “chemical offspring” from a “rented uterus,” have both finally apologized for their anti-gay adoption and IVF statements they gave earlier this year in Vogue’s September issue, reports People.

The duo’s inflammatory comments on preferring “traditional families” caused outrage worldwide with celebrities boycotting the Dolce & Gabbana brand, leading to a top exec stepping down while the designers withdrew from the public. Dolce said he reflected on his views and found them out of line:

“I’ve done some soul-searching. I’ve talked to Stefano a lot about this. I’ve realized that my words were inappropriate, and I apologize. They are just kids. You don’t need labels, baby labels.” And as far as IVF goes, he says he’s changed his tune. “I think everybody chooses for themselves. I don’t know everything about IVF, but I love it when people are happy. It’s like medicine. Science has been put on the table to help people.”

Both designers said reflecting on their first interview in 1999 when they revealed that they were gay is what ultimately changed their mind regarding IVF and non-traditional families:

“We made our first interview saying we are gay in 1999 … We lived together, and we talked about love, not sex or being gay. And it was headline TV news in Italy. But for us, it was normal!”

“Who needs an institution to tell us how to love? … We shouldn’t become too rigid. We need to understand, accept everyone.”

Dolce & Gabbana initially attempted damage control, not once but twice, back in March when they appeared on CNN to explain their comments but neither designer apologized for their comments in the interview. Watch the two attempt to salvage their image and brand, below: