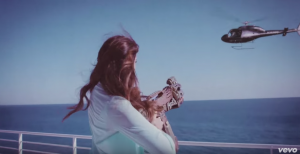 Lana Del Rey’s “High By the Beach” continues the sultry siren’s trend of music videos that are both stylish and a little incomprehensible.

Watch as Del Rey sings and does battle (but doesn’t get high) by the beach in the video below:

Del Rey recently talked about the single in an interview with Beats1 DJ Zane Lowe:

“It started with the chorus. I was driving by the beach a lot. And um, this was probably one of the last ones on the record. I liked that the chorus, melodies, all the harmonies kind of had an Andrews Sisters vibe. It was like a six part harmony. Even with the harmonies, it almost sounded monotone. It had this weird drone to it. But even with the beat, it has this trap influence…I was always want to take advantage of feeling inspired because you don’t feel that all the time. The jumping off point was the end of the other one. I wasn’t feeling too tired, still feeling inspired like I could keep going.”

Previous Post: « Can You Guess Which Out Athlete’s Beefcake Backside This Is?
Next Post: Is Al Gore Gearing Up to Run for President Again? »