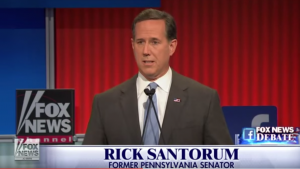 “It has not, any more than Dred Scott was settled law to Abraham Lincoln who in his first inaugural address said it would not stand and went ahead and passed laws in direct contradiction to a rouge Supreme Court…there was no constitutional basis for the Supreme Court’s decision.”

Bobby Jindal also tried to step all over LGBT rights in his push to rise above the GOP pack at the debate, saying as president he would “sign an executive order protecting religious liberty, our First Amendment rights, so Christian business owners and individuals don’t face discrimination for having a traditional view of marriage.”

Previous Post: « Can You Guess Which GOP Candidate Got An A+ on Maggie Gallagher’s Gay Marriage Report Card?
Next Post: Movie Review: ‘Meryl Streep’ in Ricki and the Flash »