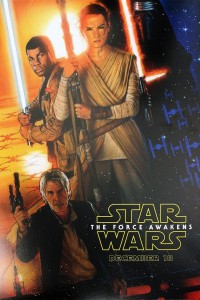 Here it is, the first official poster for what might very well come to be the biggest movie of the decade.

The film arrives in theaters December 18, but to hold you over until then here’s a reactions mash-up to the second teaser trailer released back in April.

Previous Post: « Gay Iconography: Julie Andrews Is One Of Our Favorite Things
Next Post: Florida AG Pam Bondi’s Tooth and Nail Fight Against Gay Marriage Isn’t Over Just Yet »