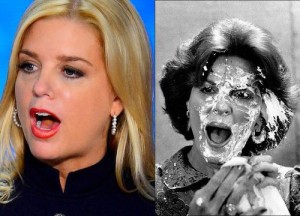 Florida Attorney General Pam Bondi, who was labeled a “modern-day Anita Bryant” and named “Loser of 2014” by the Tampa Bay Times for her unsuccessful crusade against marriage equality, is back in the news for all the wrong reasons.

Last week, Florida Attorney General Pam Bondi objected to a motion concerning legal fees from lawyers who represented gay couples seeking to have their marriages recognized in Florida. In response, she wrote that because Florida voluntarily dismissed its appeal after the U.S. Supreme Court affirmed the right to same-sex marriage nationwide, the state should not have to cover the cost of the lengthy appeals process it initiated.

Attorneys who worked to defeat the marriage ban said they have not come up with the exact amount they are owed.

“It’s ludicrous,” said Elizabeth White, a Jacksonville civil rights attorney who helped bring one of the cases that challenged the state’s gay marriage ban. “Quite frankly, the state vigorously litigated this. Now they’re saying, ‘We lost, but we don’t want to pay.’ “

Added ACLU of Florida attorney Stephen Rosenthal, who represented the same-sex couples in the case:

“It really is the height of hypocrisy to argue we shouldn’t be entitled to fees when they put us through this…They knew full well that if they lost, that they and, frankly taxpayers, would be on the hook for paying for their unwise legal defense of an unconstitutional law,”

Previous Post: « The First Official Star Wars: The Force Awakens Poster Is Here And It’s Stellar
Next Post: Ansel Elgort Strips Down with Theo James By His Side on the Set of ‘Allegiant’ – PHOTO »