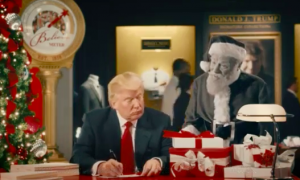 Donald Trump wants you to know he’s a “big believer in the Bible” and is ready to go to war over the word “Christmas.”

Asked his thoughts on “religious liberty” in the wake of the Supreme Court’s decision legalizing nationwide same-sex marriage, Donald Trump gave a rambling answer to conservative Alabama radio host Cliff Sims on Friday, vowing to achieve victory in the Fox News talking point known as the “war on Christmas.”

“I’m a big believer in the Bible. And you know when I see really beyond liberty there’s an assault on anything having to do with Christianity. They don’t want to use the word ‘Christmas’ anymore – department stores. There’s always lawsuits and unfortunately a lot of those lawsuits are won by the other side. I will assault that. I will go so strongly against so many of the things when they take away the word Christmas…Absolutely there’s an assault on Christianity and we’re gonna reverse that big league.”

Trump went on to talk about how he’s “very very big into the Second Amendment” and how Obama is a “disaster.”