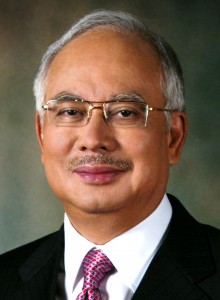 Malaysian Prime Minister Najib Razak courted controversy this week for a strongly worded condemnation of LGBT rights in his country.

Razak made the comments at an Islamic seminar outside the capital of Kuala Lumpur, reportedly lumping the LGBT community with “extremist groups” like the Islamic State.

“These groups, are hiding behind the facade of human rights to approve their acts which deviate from Islamic teaching.

“Such groups includes the Islamic State and Lesbian, Gay, Bisexual and Transgender community are targeting the younger generation to spread their ideologies – and it seems like they have managed to influence them.”

The Washington Blade reports on the reactions to Razak’s comments:

“It’s beyond outrageous that he compared people asserting their rights to love who they wish with the actions of Islamic State to find recruits,” Phil Robertson, deputy director of Human Rights Watch’s Asia Division, told the Washington Blade on Friday in an email from Bangkok.

Thilaga Sulathireh, founder of Justice for Sisters, a Malaysian advocacy group, stressed Najib’s comments increase “Islamophobia and (reinforce) the stereotype that Islam or religion is violent and does not celebrate the concept of social justice, equality, diversity, non-discrimination and more.”

“The fact is Islam does promote those concepts and principles,” Sulathireh told the Blade. “I don’t see how the principle of human rights are inconsistent with Islam or religion. They promote similar values.”

Earlier this year, a leading opposition leader the country was convicted of sodomy. Same-sex sexual activity remains illegal in the country.