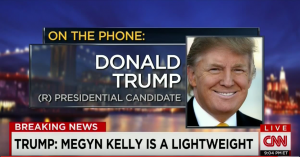 Following Thursday’s primetime GOP debate, you may have noticed Donald Trump taking to Twitter to vent his frustration with the the mistreatment he felt he faced at the hands of the Fox News network and debate host Megyn Kelly.

Trump continued to beat the anti-Megyn Kelly drum in his Friday night phone interview with CNN’s Don Lemon and managed to add another group to the growing list of people he’s offended on the campaign trail: women.

Asked by Lemon “what is it with you and Megyn Kelly?” Trump replied:

I have tried to give a great deal of latitude to Donald Trump in his run for the Presidency.

Decency is one of those lines.

As much as I do personally like Donald Trump, his comment about Megyn Kelly on CNN is a bridge too far for me.

hey this is absolutely refreshing! right! hahaha she's on her period! genius! God help us.
http://t.co/nH68ggFbjO

watching socalled conservatives okay with the period joke. Again, once you're okay with the McCain joke, there are no limits up or down.

i remember when being politically incorrect didn't mean being a shithead.

Some of the other GOP presidential candidates also sounded off on Trump’s comments:

Sad but predictable meltdown from Trump. With all due respect to @megynkelly the outrage at Trump's divisive language is long overdue.

Trump, meanwhile, attempted to brush off the criticism:

Think this latest gaffe will have any effect on the Trump candidacy?