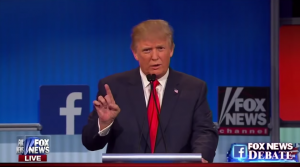 Remember that feud between Rosie O’Donnell and Donald Trump a few years back?

Well it resurfaced at the GOP debate last night when host Megyn Kelly asked Trump about his off-color remarks about women over the years – calling them “fat pigs,” “dogs,” “slobs,” and “disgusting animals.”

try explaining that 2 ur kids