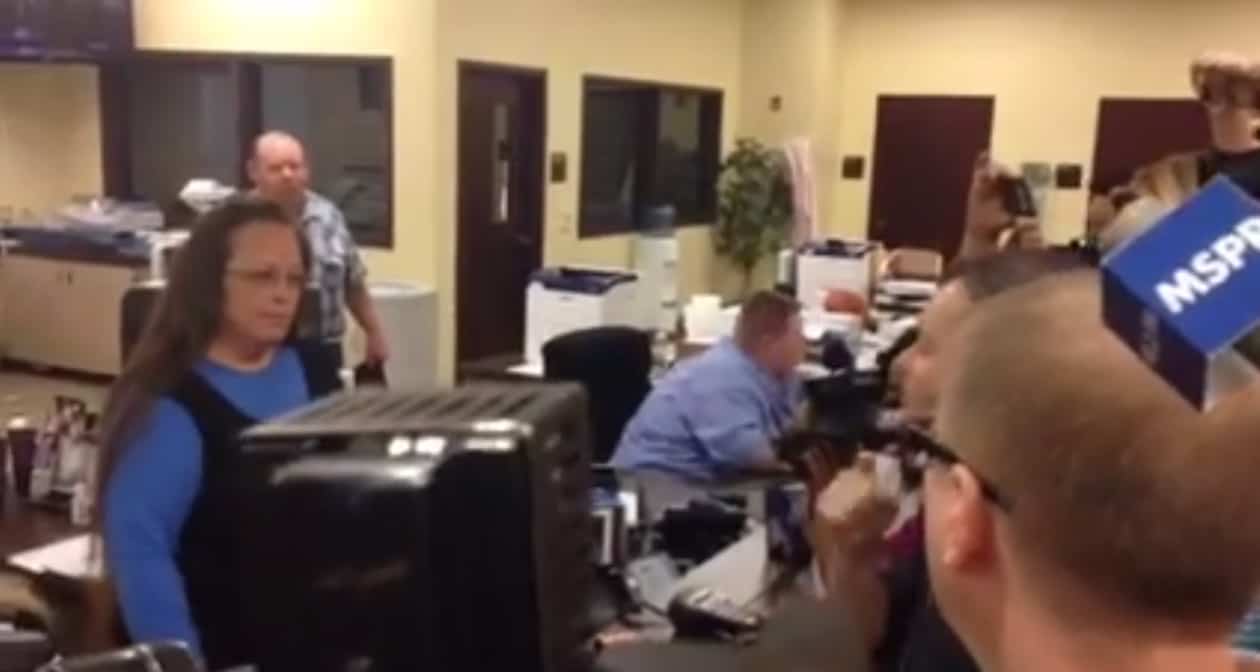 Davis has repeatedly refused to offer licenses to same-sex couples, saying that to do so would violate her own so-called ‘religious freedom.’ Just yesterday the Supreme Court denied Davis’ request to stay a federal judge’s ruling that ordered Davis to issue licenses to same-sex couples. Despite this latest legal setback, Davis has not changed her tune. Asked by a same-sex couple who was today denied a marriage license, “under whose authority” she was acting, Davis replied, “under God’s authority.”

Rowan County clerk Kim Davis emerged from her office Tuesday morning after some couples were denied the licenses. She asked David Moore and David Ermold, who’ve been rejected four times, to leave. They refused, surrounded by reporters and cameras.

Ermold said: “We’re not leaving until we have a license.”

Davis responded: “Then you’re going to have a long day.”

Davis’ supporters whooped from the back of the room: “Praise the Lord” and “stand your ground.”

Others shouted that Davis is a bigot and told her: “Do your job.”

Ermold told a deputy clerk after being denied a license, “Tell her [Davis] to come out and face the people she’s discriminating against.”

UPDATE: Sheriffs have cleared out Davis’ office after they were called to the scene:

After a defiant county clerk in Kentucky refused to issue marriage licenses to gay couples despite a U.S. Supreme Court ruling, law enforcement authorities have cleared out the office of the hundreds of people packed inside to support both sides of the issue.

The two groups lined up on either side of the courthouse entrance to chant at each other.

David Ermold has been rejected by Davis’ office four times. He said: “I feel like I’ve been humiliated on such a national level.”

He hugged David Moore, his partner of 17 years. They cried as Davis’s supporters marched by shouting, “Stand firm.”

Supporters of the couples have called the ACLU to file suit against Davis, asking that she be held in contempt.

The conversation between Davis and the couples who were denied licenses before being removed from the clerk’s office was often times tense and emotional, which you can view in this must-watch video highlighting Davis’ defiance, below:

More photos from the scene in Kentucky today, below:

Kim Davis tells couple of 17 years to go to another county to get a license. Several couples here @LEX18News pic.twitter.com/xwwkV7RBUL