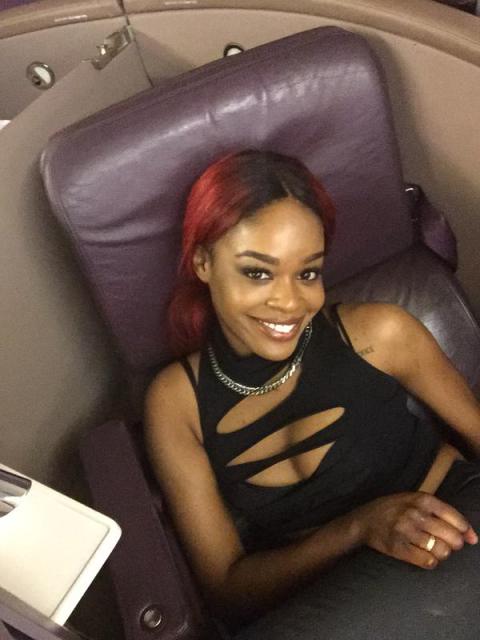 It was just last week that rapper Azealia Banks went on a violent, gay slur-laden tirade while exiting a flight. Banks then doubled down on her use of the word “faggot”, echoing previous remarks she made defending her use of the anti-gay slur.

Banks was apparently not happy with the negative reaction she received over the incident and continued to post incendiary remarks on social media taking aim at the LGBT community.

In a now-deleted tweet, Banks compared the LGBT community to the KKK, writing, “LGBT community (GGGG) are like the gay white KKK’s. Get them some pink hoods and unicorns and let them rally down rodeo drive.” 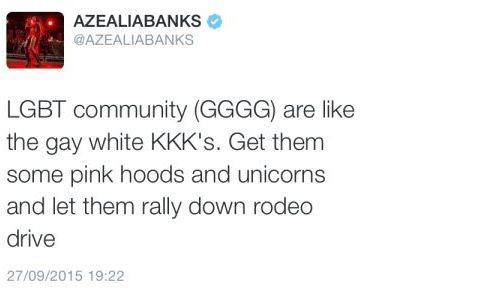 She then went on to call the LGBT community a bunch of “weaklings.”

Banks also continued the story by attacking a commenter on Instagram in a manner in-line with her previous comments, as The Daily Mail reports:

A poster called @a_sanctuary_found wrote to the musician: ‘Imagine the pain young gay fans feel when they hear the vile things you say @azealiabanks.’

To which she replied: ‘@a_sanctuary_found oh well imagine how I wanna spray a gay man in the face with pepper spray everytime he calls me a bitch a slut or a hoe. Kiss my ass. Goodnight.’

The Instagram user, clearly shocked, wrote back, ‘@azealiabanks if the shoe fits,’ before adding, ‘omg what an evil thing to say??’

‘Keep f**king with me if you f**king want to,’ the 212 hitmaker replied, before continuing with: ‘One day your hemmroids (sic) are going to burst and you’ll bleed to death bitch.’

Banks also replied to that commenter on Instagram, “Yea keep trolling for d**k on grindr. You’ll be murdered and stuffed under a truck somewhere soon.” That comment has since been deleted.

Banks previously defended her use of anti-gay language and comments by writing, “I am bisexual. My brother is trans. My employees are all gay men. Nothing else to say.”