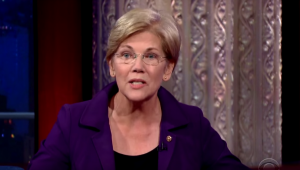 Liberal firebrand Sen. Elizabeth Warren sat down with Stephen Colbert on the Late Show last night for a discussion on the 2016 election and politics in general.

After clarifying that she’s not running for president this election, Warren explained what’s wrong with the U.S. government, to the cheers of the audience:

Previous Post: « Kim Davis’ Gay Friend Has Been Found and He’s Not Happy With Her
Next Post: The OXD Mirror: The Black Madonna Does Nick Höppner, Double-Dose Tuff City Kids and more »