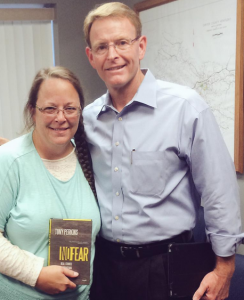 Family Research Council president Tony Perkins is wasting no time in his attempt to solidify Kim Davis’s status as an anti-gay “martyr” for Christianity on the right-wing speaking circuit. Oh and maybe she can help him sell some copies of his fear-mongering new book No Fear too.

FRC, a Southern Poverty Law Center-designated hate group, made the announcement today that Davis would be “honored” with the “Cost of Discipleship Award” at the upcoming Values Voter Summit.

“We are pleased to announce that Kim Davis  will be honored at this year’s Values Voter Summit.  After meeting with her last week, I can tell you that Kim Davis wasn’t looking for this fight, but she is not running from it either.  What militant secularists are almost certainly afraid of is what is coming to pass: courage is breeding courage. When other people might have cowered in fear, Kim took a stand. And today, millions of Americans stand with her and for the religious freedom upon which our nation was founded.

“Far from the media’s portrayal, Kim isn’t trying to impose her views on anyone, she is simply asking that her orthodox religious views be accommodated.

“The courage of Rowan County Clerk Kim Davis isn’t just changing the conversation — it’s changing the political landscape. In places like Missouri, where state officials watched with horror as Davis was hauled off to jail for her Christian beliefs, leaders are moving quickly to protect their people from the same fate. The Supreme Court created this mess — now it’s incumbent on states to protect the victims mired in it.

“While the Court redefined marriage, it did not redefine the First Amendment. Thank goodness for people of courage like Kim Davis, who refuses to let religious liberty be trampled by legal tyranny.  We applaud her. In the face of intense pressure, she’s shown more courage than 99 percent of the elected officials in Kentucky,” concluded Perkins.

The Values Voters Summit kicks off September 25 in Washington D.C.