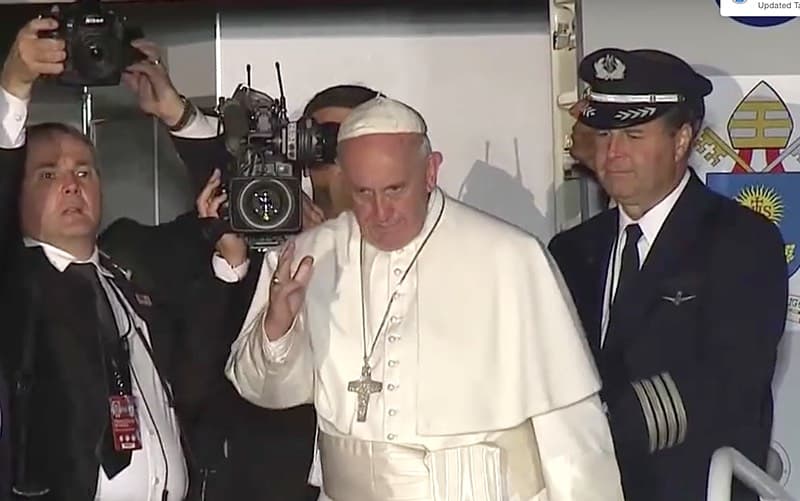 On Pope Francis’ flight back to Rome from the United States he gave an interview aboard Shepard One to reporters on a variety of topics, one of which was the debate making national headlines involving Rowan County, Kentucky Clerk Kim Davis, Reuters reports:

On the flight back to Rome, he was asked if he supported individuals, including government officials, who refuse to abide by some laws, such as issuing marriage licenses to gays.

“Conscientious objection must enter into every juridical structure because it is a right,” Francis said.

“And if someone does not allow others to be a conscientious objector, he denies a right,” he added.

Francis said conscientious objection had to be respected in legal structures. “Otherwise we would end up in a situation where we select what is a right, saying: ‘This right has merit, this one does not.'”

Francis also commented on the sexual abuse scandal within the Catholic Church:

“We know abuses are everywhere, in families, in the neighborhoods, in the schools, in the gyms, but when a priest abuses it is very grave because the vocation of the priest is to make that boy, that girl grow towards the love of God, toward maturity,” he said.

“But instead (the victim) is crushed by evil and this is nearly a sacrilege because the priest has betrayed his vocation, the calling of the Lord,” the pope said.