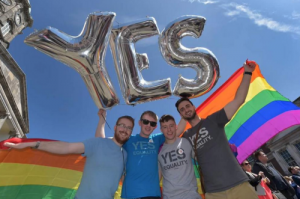 Same-sex couples will be able to marry in Ireland by year’s end after the Supreme Court turned away an appeal of a challenge to the country’s historic referendum victory back in May.

The government had planned to enact the required laws by the end of July but was delayed after two men sought to challenge the outcome, one of whom said it had been unfairly influenced by government parties campaigning for a ‘Yes’ vote.

The government will introduce the legislation when it returns from summer recess next week.

“I hope this legislation can be enacted as soon as possible so that the first same-sex marriages can take place before the end of the year,” Justice Minister Frances Fitzgerald said in a statement.

Previous Post: « Jesse Tyler Ferguson on His Kardashian-Filled Quest to Find His Hubby’s Best Birthday Present
Next Post: Trump Shrugs Off Question About ‘Getting Rid’ of All The Muslims: WATCH »