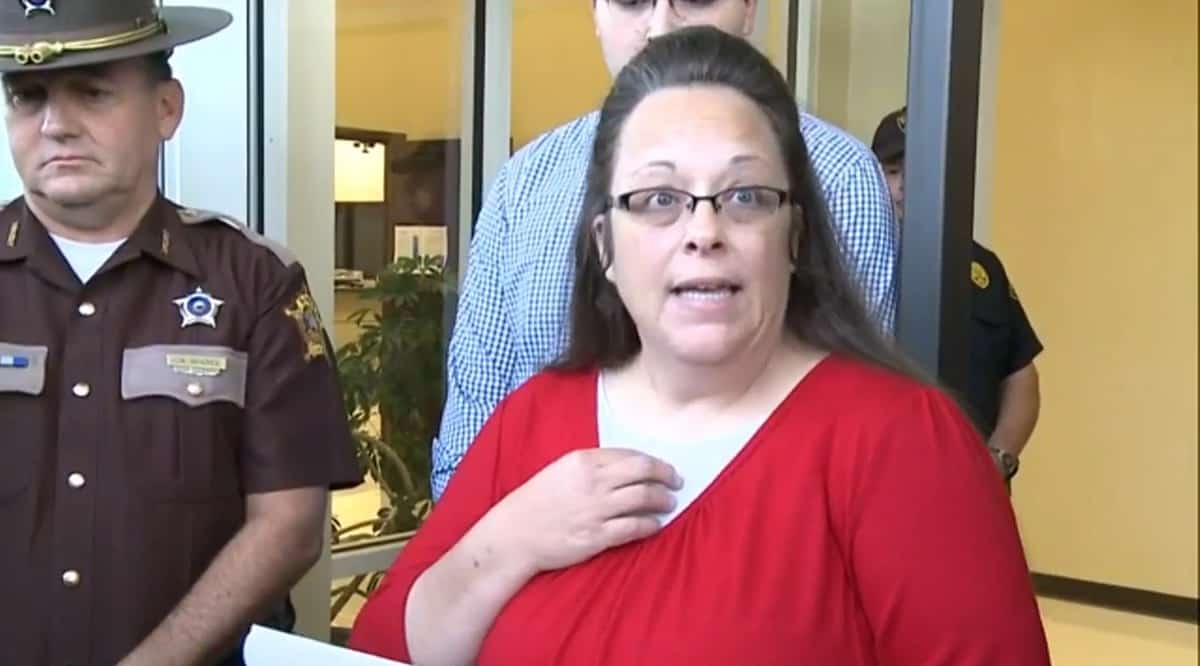 Rowan County Clerk Kim Davis just gave a 6-minute statement outside the County Courthouse as she returned to work this morning. Watch BELOW.

“Good morning. I am here before you this morning as I return to work to say that I love my lord Jesus, I love all people, and I love my job. I want to continue to serve all three as I have tried to do until now….”

Davis said that for months she has asked the legislature to intervene and provide her an accommodation for her religious beliefs so that she would have to violate her conscious by putting her name on a marriage certificate for a gay couple.

“A very simple accommodation I have proposed is to remove my name and title as the Clerk of Rowan County completely off the marriage license. These license could be issued under another authority, including perhaps the Commonwealth of Kentucky, or Governor Beshear himself…Because my pleas for a modest accommodation have been refused…I have been required to do that which my conscience forbids. As a result I have spent six days in jail because I could not abandon my faith.”

She added, getting teary-eyed:

“I’m here before you this morning with a seemingly impossible choice, that I do not wish on any of my fellow Americans, my conscience, or my freedom. I have thought and prayed very hard about what to do…I don’t want to have this conflict, I don’t want to be in the spotlight, and I certainly don’t want to be a whipping post. I’m no hero, I’m just a person who has been transformed by the grace of God, and who wants to work, be with my family. I just want to serve my neighbors quietly, without violating my conscience. And so this morning I am forced to fashion a remedy that reconciles my conscience with Judge Bunning’s orders..”

Davis then said she would allow clerks to issue marriage licenses to gay couples if they wanted to avoid going to jail but that the licenses would not have her name or authority on them:

“Effective immediately, and until an access is provided by those with authority to provide it, any license issued by my office will not issued or authorized by my me. I want the whole world to know, no mistake about it, that my deputy clerks do not have the authority to issue a license whatsoever. If any of them feels that they must issue an unauthorized license to avoid being thrown in jail, I understand their tough choice and I will take no action against them. However,…Any unauthorized license that they will issue will not have my name, my title, or my authority on it, Instead, they will say that they are issued pursuant to a federal court order.”

Davis begged state authorities to provide a solution to her conflict:

“I urge governor Beshear, the legislature, and the court to intervene. They have the authority to provide these types of accommodations.”

Davis refused to step down from her job.

Also at work today: Nathan Davis, son of #KimDavis. He is deputy clerk. Says he will NOT issue marriage licenses pic.twitter.com/uyxbATb57g