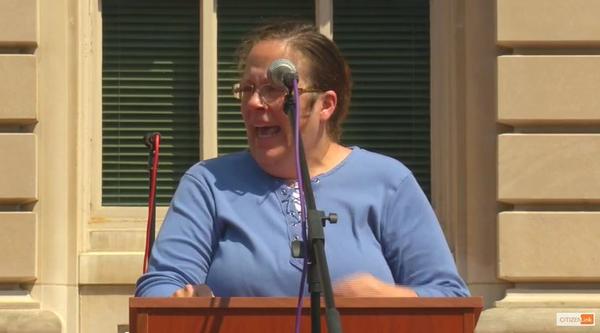 Davis has repeatedly denied gay couples marriage licenses in the wake of the Supreme Court’s ruling in Obergefell v. Hodges. She has also asked the judiciary to intervene on her behalf, claiming that it would be a violation of her ‘religious liberty’ to force her to provide equal rights to same-sex couples. And though the U.S. Supreme Court denied Davis’ request for an emergency stay of a federal judge’s ruling that Davis must in fact comply with Obergefell, Davis remains undeterred.

In her statement posted by the anti-gay Liberty Counsel,  Davis declares that the question of allowing same-sex marriage “is a Heaven or Hell decision” that centers on her “religious freedom”:

I have worked in the Rowan County Clerk’s office for 27 years as a Deputy Clerk and was honored to be elected as the Clerk in November 2014, and took office in January 2015. I love my job and the people of Rowan County. I have never lived any place other than Rowan County. Some people have said I should resign, but I have done my job well. This year we are on track to generate a surplus for the county of 1.5 million dollars.

In addition to my desire to serve the people of Rowan County, I owe my life to Jesus Christ who loves me and gave His life for me. Following the death of my godly mother-in-law over four years ago, I went to church to fulfill her dying wish. There I heard a message of grace and forgiveness and surrendered my life to Jesus Christ. I am not perfect. No one is. But I am forgiven and I love my Lord and must be obedient to Him and to the Word of God.

I never imagined a day like this would come, where I would be asked to violate a central teaching of Scripture and of Jesus Himself regarding marriage. To issue a marriage license which conflicts with God’s definition of marriage, with my name affixed to the certificate, would violate my conscience. It is not a light issue for me. It is a Heaven or Hell decision. For me it is a decision of obedience. I have no animosity toward anyone and harbor no ill will. To me this has never been a gay or lesbian issue. It is about marriage and God’s Word. It is a matter of religious liberty, which is protected under the First Amendment, the Kentucky Constitution, and in the Kentucky Religious Freedom Restoration Act. Our history is filled with accommodations for people’s religious freedom and conscience. I want to continue to perform my duties, but I also am requesting what our Founders envisioned – that conscience and religious freedom would be protected. That is all I am asking. I never sought to be in this position, and I would much rather not have been placed in this position. I have received death threats from people who do not know me. I harbor nothing against them. I was elected by the people to serve as the County Clerk. I intend to continue to serve the people of Rowan County, but I cannot violate my conscience.

Meanwhile, the AP reports that Davis and her staff have been ordered to appear in court on Thursday as a federal judge decides whether to hold Davis in contempt.

Previous Post: « Here’s Everything You Need To Know About The Next Big Fight For LGBT Rights
Next Post: MTV’s ‘Faking It’ Returns with a Gay High School Romance to Steam Up Your TV: WATCH »