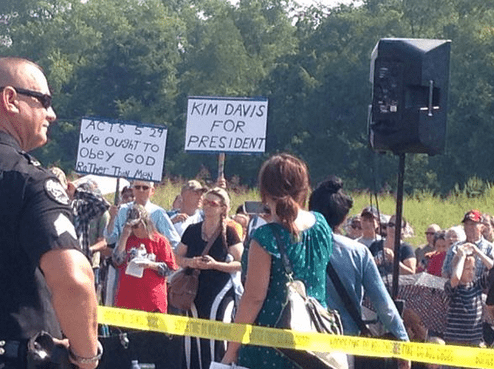 Hundreds of Kim Davis supporters rallied outside the Carter County Detention Center yesterday to protest the Kentucky clerk’s incarceration there.

“She won’t bow, I promise you,” her husband, Joe Davis, told the crowd while dressed in overalls and a camouflage ball cap. He said he talked to her the morning she was put in jail and the two of them decided not to give in.

“I’m just an old, dumb, country hillbilly, but I know God,” he said.

The crowd and speakers made a point to speak out against U.S. District Judge David Bunning for putting Davis in jail. One man held a sign reading “Judge Bunning is an abomination.”

“His son is working against the will of God,” said Benham, who carried a white cap with the name “Jesus” on it. “He’s being used by the devil to park Kim here.”

WKYT adds the mayor of Grayson, the county seat of Carter County, was also on hand at the rally.

Another rally outside the detention center is expected to take place Tuesday featuring an assorted collection of hate groups and anti-gay extremists.