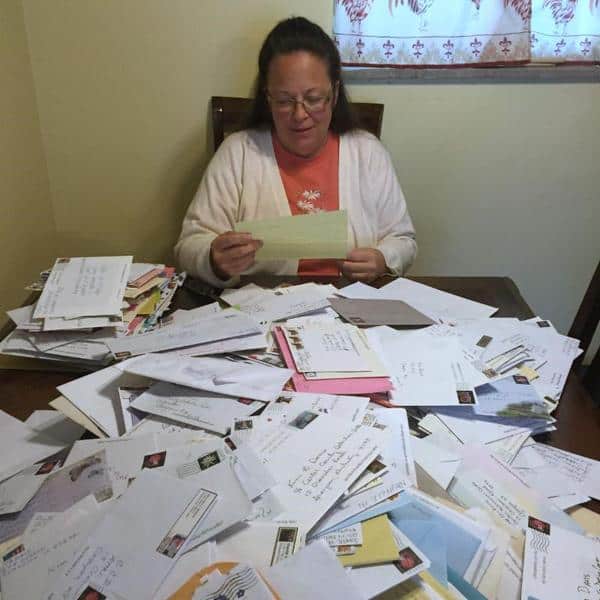 Kim Davis will return to work on Monday according to her lawyers at the anti-gay legal group The Liberty Counsel. Freed from jail yesterday by federal judge David Bunning only after her deputies began issuing marriage licenses to same-sex couples, Davis returned home following her bizarre hate rally outside the detention facility where she was jailed. The speakers list for that rally was a veritable who’s who of the anti-gay right wing, with The Benham Brothers, Tony Perkins, Brian Brown, Mat Staver and Mike Huckabee all present to exploit Davis.

#UDPATE #KimDavis will return to work as Rowan Co Clerk on Monday. Unclear what will happen with marriage licenses

Davis is at home in Rowan County where she is enjoying time with her family after spending six days in jail.

“I am deeply moved by all those who prayed for me. All I can say is that I am amazed and very grateful. I am enjoying spending time with my husband, my family, and my three dogs.  I have also been spending time reading boxes of letters expressing support and prayers from people around the country,” Davis said.

On Wednesday, Davis has been going through the hundreds and hundreds of letters sent to her at the jail.

“I haven’t even made a dent in the piles of letters,” she said.

Davis said she enjoys her job, God and people.

“I love God, love people, and love my work. I hope we will continue to respect these values and that America remains a place where all three can live in harmony,” Davis said.