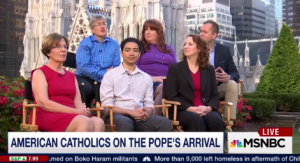 What would you say to Pope Francis if you were given a one-on-one meeting with him?

That’s the question MSNBC anchor Thomas Roberts posed to a group of LGBT and pro-choice Catholics during a recent sit-down outside NYC’s St. Patrick’s Cathedral.

“The first thing I would say would be ‘Bless me father for I have sinned,'” said Dawn Ennis, a trans woman and editor for The Advocate. “But I would not be able to leave that moment without saying to him ‘Please see me, please see who I am.'”

“I would ask him to open his heart to the LGBT community in particular and other communities that have been put aside by the church in many ways and hurt by the church,” added another panelist.

Later, the panelists were asked why they think Pope Francis is different from his predecessors. Check out the two part interview below.