You are here: Home / Michael Fassbender is a Man with a Vision in New Steve Jobs Trailer: VIDEO 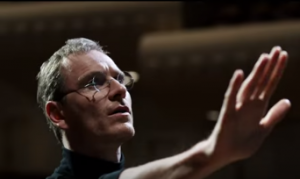 A new Steve Jobs trailer is out, giving viewers a fresh look at some of the personal and professional struggles the Apple icon had to overcome on his road to success.

Set backstage at three iconic product launches and ending in 1998 with the unveiling of the iMac, Steve Jobs takes us behind the scenes of the digital revolution to paint an intimate portrait of the brilliant man at its epicenter.

The film is written by Aaron Sorkin and looks to echo the tone of his previous film The Social Network, which went on to win three Academy Awards (Best Adapted Screenplay, Best Original Score, and Best Film Editing). The film is directed by Danny Boyle (127 Hours, Slumdog Millionaire)

Want to be notified when the next Steve Jobs trailer is released? Click HERE and LIKE our page on Facebook. Select “get notifications” in pulldown menu to receive our headlines in your feed