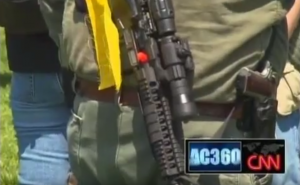 The Oath Keepers, the anti-government militia group that made headlines earlier this year for showing up in Ferguson, Missouri armed with assault weapons, have now set their scopes on Rowan County, Kentucky.

The group has vowed to stop U.S. Marshals from arresting the Kentucky clerk should she interfere with the issuance of same-sex marriage licenses when she returns to work Monday. 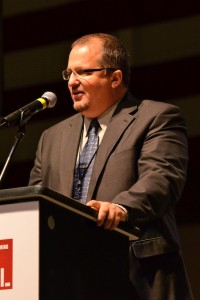 Oath Keepers founder Stewart Rhodes [pictured] announced yesterday that he had reached out to Davis’ lawyers at Liberty Counsel to offer the protection of his group, which he says is already forming a presence in Rowan County, Kentucky, where Davis was recently released from jail after prohibiting her office from issuing marriage licenses. Rhodes said in a statement that his position has nothing to do with gay marriage, but rather his conviction that Davis had been illegally detained by the federal judge who held her in contempt for violating multiple court orders. […]

Rhodes said that the Rowan County sheriff should have blocked U.S. Marshals from detaining Davis, but since neither the sheriff nor the state’s governor will do their “job” and “intercede” on behalf of Davis, the Oath Keepers will have to do it instead. “As far as we’re concerned, this is not over,” he said, “and this judge needs to be put on notice that his behavior is not going to be accepted and we’ll be there to stop it and intercede ourselves if we have to. If the sheriff, who should be interceding, is not going to do his job and the governor is not going to do the governor’s job of interceding, then we’ll do it.”

Listen to Rhodes discussing his plans with Oath Keepers activists and Jackson County, Kentucky, Sheriff Denny Peyman in the audio clips below: