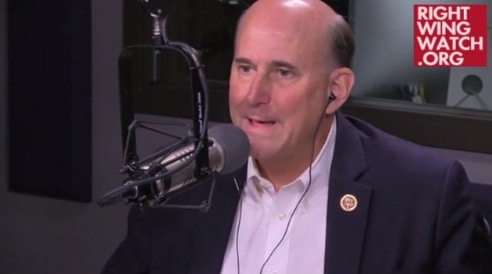 Rep. Louie Gohmert continued his obsession with the topic of gays in the military yesterday in in a discussion on Eric Fanning, President Obama’s openly gay nominee for Secretary of the Army.

In an interview with Gohmert yesterday on his “Washington Watch” radio program, Family Research Council President Tony Perkins said that the Senate should refuse to confirm a new Army secretary following a New York Times report alleging that U.S. officials in Afghanistan told service members to look the other way on cases of sex abuse among allied Afghan fighters. Perkins said that the Senate should tell the president that “we are not going to confirm your nominee, especially this guy.”

“What do you think they will think,” Gohmert wondered, “when they hear that not only did we tolerate what was being done to their boys by people under our authority but we turn around and approve a Secretary of the Army that they as moderate Muslims believe is just an atrocious thing? They’re going to think that that is quite consistent with us approving of what was going on between the older men in authority and these boys.”

He added: “This is not a good move, but the president’s priority has not been the lives of our military.”