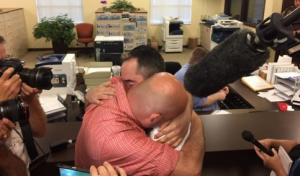 The second same-sex couple to get a marriage license in Rowan County: Michael and Timothy Long. pic.twitter.com/zW2wuDySeV

Earlier this morning, Kim Davis’s (current) husband spoke to reporters outside the courthouse about his wife:

Husband of #KimDavis speaking openly this morning outside of his wife's office pic.twitter.com/Jh7HLJL7Dn