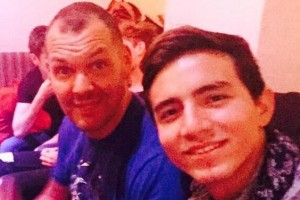 Two London-area men who booked a ride home through the car sharing service Uber have alleged they were thrown out of their cab for kissing, the London Evening Standard reports:

Sam Simons, 36, claimed he and friend Santiago Figeuroa were in the back of the private car on their way home after a night out when the “ridiculous” incident flared up on Saturday.

The pair, both hairdressers, were only a few minutes into their journey from Chelsea back to Greenwich when Mr. Figeuroa unfastened his seatbelt to shuffle across the back seats so they could look at photos on a phone together.

But when the 20-year-old put his arm around Mr Simons and kissed him, the driver allegedly stopped the car and screamed “Man should not kiss man” several times before ordering the pair out the cab.

An Uber spokesperson said the company has suspended the driver and is investigating the incident:

As a company we do not tolerate any form of discrimination whatsoever, and we have been in contact with this rider to offer our support. Uber prides itself on providing the highest quality, safest and most convenient service, so we take any incident where we fall short very seriously.

A similar incident occurred earlier this year in which a gay couple were thrown out of their Uber cab in London- also for kissing.