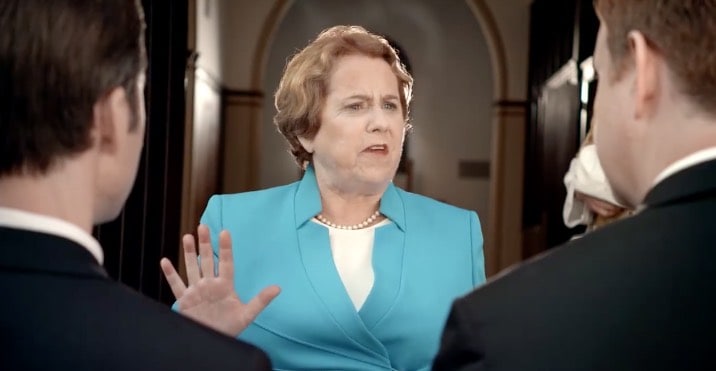 A new commercial for Tide To Go features what appears at first to be a Bible-clutching anti-gay bigot who would make Kim Davis proud.

“How offensive,” the woman exclaims as a gay couple approaches a church for their wedding. “I won’t let you blemish the sanctity of marriage!”

And then the twist is revealed.

The spot is directed by Mark Nickelsburg (who shared it to Facebook) and features actors Matt Marr, Karl Ramsey, and Lynne Marie Stewart. No word on when it will air.

Said Nickelsburg: “First a clerk in Kentucky, and now a church lady in Los Angeles! This same sex couple faces yet another obstacle on the way to marriage equality in this spot I directed for Tide to Go.”

This is the second commercial from Tide recently featuring gay themes. Check out the first, which features a gay couple bickering about household laundry etiquette here.

UPDATE: It turns out the commercial is a spec ad, as AdWeek points out. Here’s to hoping Tide will pick it up.