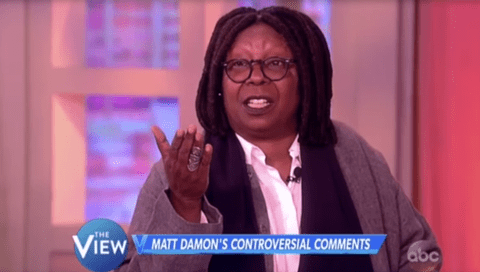 Yesterday on The View, Whoopi Goldberg weighed in on Matt Damon’s comments about gay actors in Hollywood, remarking that an actor’s sexuality shouldn’t impact their abilities as a performer.

As we reported, Damon told The Guardian,

“I think you’re a better actor the less people know about you period. And sexuality is a huge part of that. Whether you’re straight or gay, people shouldn’t know anything about your sexuality because that’s one of the mysteries that you should be able to play.”

Said Goldberg on The View:

“I played a gay woman, in ‘Color Purple,’ a man in ‘The Associate’ and we’re actors, we’re supposed to be able to play everything and play it convincingly. So, I don’t think whether you know, or think or believe I’m gay has nothing to do with what my abilities are. As an actor that’s how I feel.”

Watch video of her remarks below: