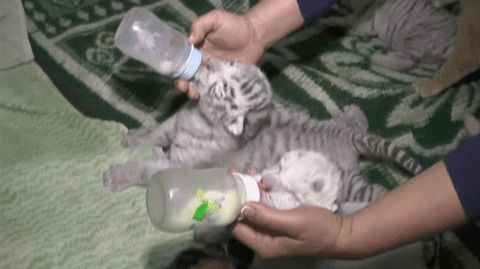 Three white bengal tigers have been born at Yalta Zoo in Crimea. While news reports have varied as to the exact number of cubs (some suggester there were 4 not 3), a video posted online appears to show only three. The video of the young big cats, from NBC News, shows them exploring their world and being generally cute and cuddly.

“Oksana Zubkova stated that the three boys, two of them are common white striped, and one is practically white. Unfortunately the mother abandon which their staff weren’t successful dealing with. The young are developing well and so they aren’t bored we sent them to a nursery with lion cubs which were themselves not born long ago,” said zoo staff member. [sic]”

[The zoo] adds that its unusual for a tiger to give birth to so many cubs.

[The cubs’ mother] was given to the zoo as a gift by former Ukrainian Prime Minister Yulia Tymoshenko in 2009.

Watch a video sure to help with a case of the Mondays, below: