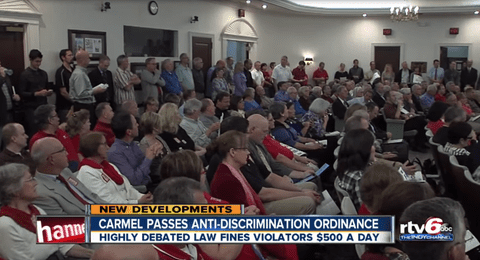 The city council in Carmel, Indiana passed a human rights ordinance Monday night that will protect Carmel’s LGBT citizens from being discriminated against on the basis of their sexuality or gender identity.

The affluent Indianapolis suburb also gave the city’s attorney the power to fine those who violate the ordinance up to $500 a day until the discrimination ceases. That provision sparked outrage among some members on the Council, but proponents fought to keep it in. One change was made Monday night: the city attorney will have the discretion to provide a warning to first-time offenders.

A deeply divided council ultimately voted 4-3 in favor of the ordinance after more than six hours of public comment over three meetings.

City Council President Rick Sharp was joined by Ron Carter, Sue Finkam and Carol Schleif in support. Some have said many of the religious arguments used against the ordinance were once used to deny African-Americans and women their rights.

Sharp said he is a Christian, and he believes discrimination and intolerance are wrong.

“I just don’t find a justification for intolerance at any point,” he said.

Council members Eric Seidensticker, Luci Snyder and Kevin Rider voted against the ordinance but said they would instead support a resolution saying Carmel is a welcoming community, which passed later Monday 7-0. Snyder and Rider had been sponsors of the ordinance, but in the past six weeks they indicated they wanted changes made, including a less harsh penalty, perceived legal deficiencies in the wording and more exemptions for Christian-owned businesses. All three say they are against discrimination but couldn’t support Carmel’s ordinance without some or all of those changes.

“If you make me choose between God and government, I’m going to choose God every time,” Rider said.

Watch a report from RTV 6 News, below: