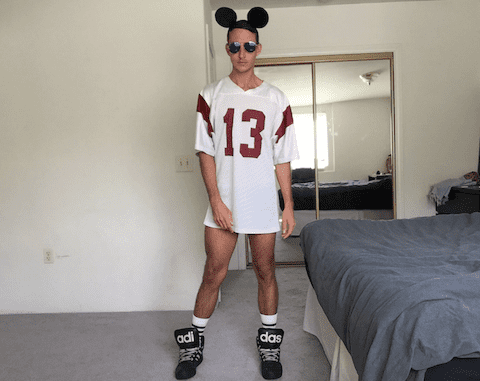 A gay Disneyland fan who attended the park during it’s unofficial Gay Days event found himself accosted by a park employee, who ran up to him shortly after he entered the park and asked if he was wearing shorts under a long jersey reports Advocate.com

QX Magazine writer Anthony Gilét was planning to wear a red t-shirt, which gays and lesbians use to identify themselves during Gay Days, but opted for an oversized red and white jersey instead that covered his shorts giving the illusion he wasn’t wearing pants.

Within minutes of entering the park, a park employee approached Gilét and questioned him if he was wearing anything underneath his jersey:

“Within a few minutes of being inside the park, a member of staff chased us down, before asking ‘do you have anything on under that top?’ So I told her yes, and showed her the shorts I had on underneath. To which she replied, ‘OK… Because it gives the impression that you have nothing on underneath. Do you have a change of outfit? Because if not, security may remove you from the park.’ Really? Why?

Gilét had brought a spare pair of long shorts in a bag and changed to avoid being kicked out of the park. However, Gilét took to his website cocktailsandcocktalk.com to explain and analyze the incident:

“After checking Disney’s dress code it doesn’t mention anything related to what I was wearing on normal days, although under the heading ‘Gay Days’ however, it says no “club wear.” Yes, I’ve seen plenty of girls wearing oversized jerseys as a dress in the club, but I’ve also seen them doing it on road, too. But as it only said this under the ‘Gay Days’ heading, I wonder was it simply an issue of a gender; a boy wearing this is not permitted, but a girl could because it’s more socially acceptable for them to wear a dress.”

Religious wingnuts like Janet Porter and One Million Mom’s have criticized the park’s Gay Days and its gay attendees in the past for ‘inappropriateness,’ with Porter particularly warning families of ‘public displays of perversion,’ and ‘men dressed in women’s clothing,’ while One Million Mom’s has decried the unofficial yearly event stating that ‘gay men, bisexuals and transvestites desensitize children.’