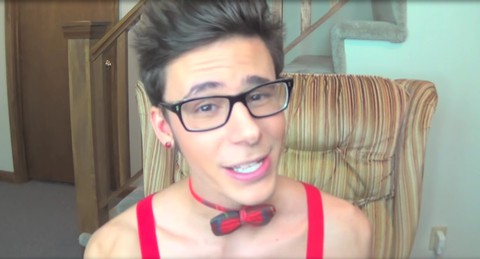 Earlier this month, we told you about gay vlogger Jack Merridew’s hilarious and adorable video on sexy gay Halloween costumes. In it, Jack tried on five different sexy Halloween costumes and had his mom judge which one he should wear for Halloween. The video quickly went viral, racking up over 400,000 hits. Now, Merridew is back and responding to the haters and trolls who body-shamed and attacked him because of his video.

Said Merridew, “All the hate on this Halloween costume video came from gay men, and it was weird…Come on, gay men. We’re supposed to be brothers.” He then quipped, “We’re a big f*cking family. And you can’t choose your family. I’m that brother that you want to get rid of, but you know what? You’re f*cking stuck with me.”

RELATED: Watch This Gay Guy Decide Which Sexy Costume to Wear on Halloween–With Help From His Mom: VIDEO

Merridew went on to read some of the hateful comments he received and ended his response with a call to action to stop enabling double standards, focusing on the so-called “gay stereotype” and, finally, to be kinder to one another. Said Merridew,

“Please, please, please don’t become the type of gay man who comments crap like this on other people’s video, Facebook, news articles…don’t be the type of gay guy who puts down other people…Love one another, be nice to one another, help each other out. And let’s, as a community, attack Kim motherf*cking Davis. And not small little twinkie boys who want to dress like sluts for Halloween, okay?

For the record, we think you look great, Jack. And we loved the Halloween video. So don’t let the haters stop you from doing your thang.

We know you won’t.

Previous Post: « Should Gay Cousins Be Allowed to Marry?
Next Post: Gwen Stefani Is Heartbroken in Emotional New Music Video for ‘Used To Love You’ – WATCH »