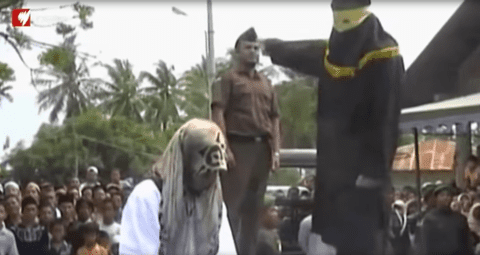 A new law has gone into effect in the Indonesian province of Aceh that makes gay sex punishable by up to 100 lashes followed by imprisonment up to 100 months. Those convicted can also opt to pay a hefty fine of 1,000 grams of fine gold to avoid such draconian treatment.

Homosexuality is not illegal in Indonesia but the province of Aceh has maintained a certain degree of autonomy from the government in Jakarta in recent years, as The Inquisitr notes:

In 2001, in an effort to eliminate the decades-long separatist movement in the country, Jakarta and Aceh came to an understanding regarding their right to govern themselves, and a peace deal with the central government was struck in 2005 as well. Since that time, they have slowly implemented Islamic Sharia laws. Indonesia is a hugely populous and Muslim-majority nation, and yet the Aceh province is the only one allowed to implement Sharia law, which means that they can these public caning sessions for anyone caught breaking their laws.

The BBC reports on the new anti-gay law:

The law, passed in 2014 but only now being enforced, has faced opposition by rights groups.

The strictly Muslim province has become increasingly conservative in recent years and is the only one in Indonesia allowed to implement Sharia law.

Under the new laws, adultery also carries a possible penalty of 100 strokes. Those who accuse someone of adultery without proof could themselves face 80 lashes.

But Ismail Hasani, from human rights group the Setara Institute for Democracy and Peace, criticised the law as “cruel, inhumane and against the constitution”.

The lashings are carried out using thin rattan sticks and intended to publicly humiliate as much as physically harm the accused.

Watch a news report on the implementation of sharia law in Aceh from 2014, below:

Previous Post: « Why You Should Be Helping Brian Sims Get to Congress
Next Post: Do You Know What A Gay Bear Is? – WATCH »