Lambda Legal has filed a federal lawsuit on behalf of Dana Zzyym, an intersex veteran, after Zzyym was denied a U.S. passport because they do not identify as male or female. 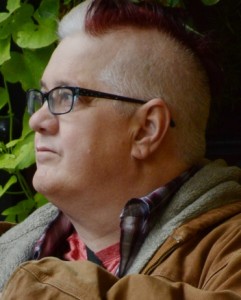 Dana, who uses the gender-neutral pronouns “they,” “them” and “their,” was born with ambiguous sex characteristics. Shortly after Dana’s birth, their parents and doctor decided to raise them as a boy. As a result, Dana underwent several irreversible, painful and medically unnecessary surgeries that didn’t work, traumatized Dana and left them with severe scarring. It was only many years later, after serving six years in the U.S. Navy and then attending Colorado State University, where they also worked as a custodian, that Dana began researching the surgeries and came to understand they had been born intersex. Drawing on personal experience, Dana began educating the public about issues facing intersex people. Dana currently serves as associate director for the United States affiliate of the Organisation Intersex International (OII-USA).

As part of their work, Dana was invited to attend the International Intersex Forum in Mexico City in October, 2014, at which time Dana applied for a U.S. passport. The application requires that the applicant select a gender marker of either ‘male’ or ‘female.’  It also requires first-time applicants to submit a birth certificate, which in Dana’s case lists their sex as “unknown.” But, notwithstanding the information on their birth certificate and the fact that Dana’s doctors with the U.S. Department of Veterans Affairs confirm their gender as intersex, Dana’s application for a passport was denied.

“Dana is intersex, identifies specifically as intersex and rejects categorically any effort by the federal government to compel them to choose one way or the other. The State Department in effect is demanding that Dana use incorrect information on the passport application and choose either ‘male’ or ‘female’ when, in fact, Dana is neither. They shouldn’t have to choose….It is against the law to ‘willfully and knowingly’ make a false statement on a passport application, and yet, in a classic Catch-22, the application itself and State Department ‘policy’ make it impossible for a person who is inherently neither male or female to list their gender. Dana is being deprived of the right to lawfully exit the United States because of personal characteristics, and that’s discrimination, pure and simple.”

The lawsuit charges the State Department with violating the Due Process and Equal Protection clauses of the U.S. Constitution, as well as the federal Administrative Procedure Act.

“When I was a child, I had no say in what was done to me in order to make me ‘fit’ in some acceptable category. I continue to suffer the consequences of those decisions today. But, as an adult, I can take a stand. I am not male, I am not female, I am intersex, and I shouldn’t have to choose a gender marker for my official U.S identity document that isn’t me.”

We've filed a case on behalf of an intersex client denied a passport: https://t.co/hrNnJ9AH2D #IntersexAwarenessDay pic.twitter.com/ms7n2hoLMb

Today is Intersex Awareness Day. Here’s a helpful video on what it means to be intersex: