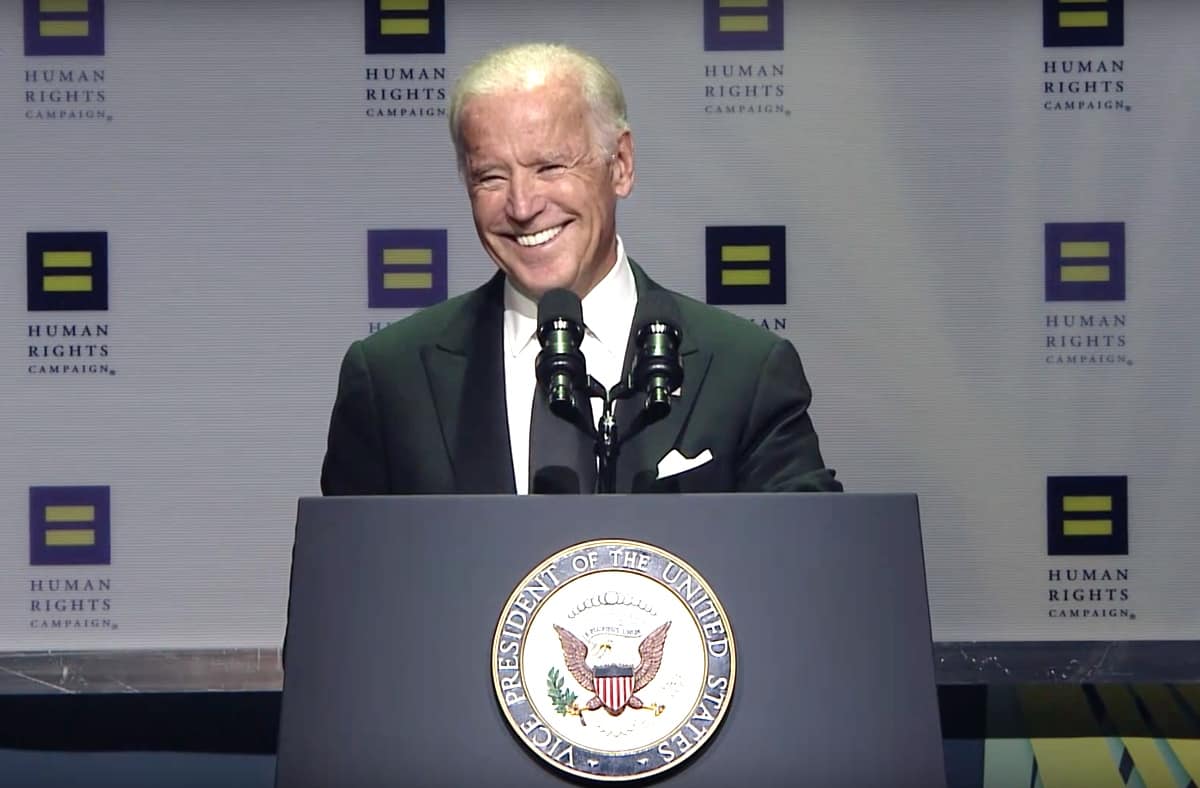 Vice President Joe Biden began his Saturday night keynote speech to the Human Rights Campaign (HRC), “A number of you have said to me over the last three to four years…” and an audience member yelled,“You should run!”

Biden responded: “Thank you very much — no, they didn’t say that.”

Biden spoke about speaking up out of turn on Meet the Press about his support for marriage equality.

“Folks I was just answering in a straightforward direct way what I’ve known my whole life. It’s based on a proposition best expressed by my dad to me when I was 17 years old….

“He was driving me into town, into the town square…dropping me off so that I could run in and get an application to be a lifeguard in the city swimming pool system. And we’re at a light, before it changed and I was about to get out and I looked to my right and there were two — very well-dressed, conservative dressed men, who embraced each other and kissed and walked in different directions, to their jobs I assume.

“And I turned and looked at my dad.  And I’ll never forget what he said.  He said, Joey, they’re in love with each other.  It’s that simple.  (Applause.)  And it’s always been that simple for me.”

Biden gave credit to the people for making gains in LGBT rights over the past decades.

“It wasn’t simple for so many who went before us. All of you, all of those who came before us, from stonewall to today. Harvey Milk, Matthew Shepard gave his life. So many others . Not only did so many of you do so much more than anything those of us in public life have ever done…You showed up. You showed enormous courage and in many cases physical courage, physical courage.. You risked your jobs, your livelihoods, your very physical well being. Recognize just for a moment where we are, what you did, what was done, and realize that the great arc of justice is the journey of this nation and it continues to move in the right direction and we’re moving closer and closer to the animating spirit of America because of you!”

He spoke about passing the equality act and what it will take:

He added, getting a huge laugh:

“There are still homophobes left. Most of them are running for president I think.”

Biden called transgender rights “the civil rights issue of our time”, called the number of homeless LGBT youth in the nation “sad,” expressed gratitude for work to help LGBT immigrants, called for an end to gay conversion therapy, urged solutions for the disparities in HIV treatment, and called for dishonorable military discharges to be changed to ‘honorable’.