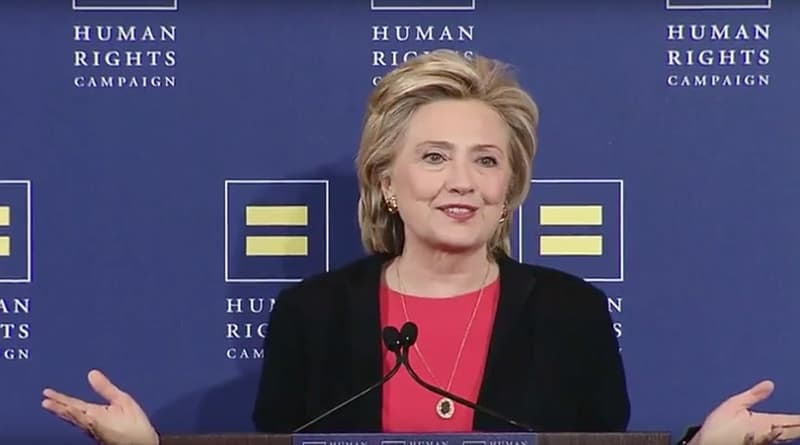 Democratic presidential candidate Hillary Clinton addressed the Human Rights Campaign at a daytime event before the group’s Washington D.C. gala this evening at which Vice President Joe Biden will give the keynote address. Clinton is appearing on the premiere of Saturday Night Live.

Clinton warned those gathered that the rights the LGBT community has fought so hard for could be taken away by conservatives and it is important to be vigilant.

“There are still public officials doing everything in their power to interfere with your rights.”

She referred to Mike Huckabee and Kim Davis:

“We assure [gay youth] it gets better, but it can still be really hard to believe that especially when you turn on the TV and you see a Republican candidate for president literally standing in the courthouse door in Kentucky calling for people to join him in resisting a Supreme Court ruling, celebrating a Kentucky clerk who’s breaking the law by denying other Americans their constitutional rights.”

She spoke of the international human rights abuses with regard to the LGBT community:

“Hundreds of millions of people live in places where they would be arrested, even executed for being gay…Gay rights are human rights and human rights are gay rights. I believe with all my heart the United States does have to stand up for human rights everywhere.”

Clinton told the group that military records should be corrected for service members discharged dishonorably for being gay:

“They were given less than honorable discharges,” Hillary Clinton said. “I can’t think of a better way to thank those men and women for their service than by upgrading their service records.”

She also said that transgender people should be able to serve openly in the military.

Clinton also got huge applause when she said that Congress needs to pass the Equality Act which would forbid anti-LGBT discrimination across the nation:

“It’s a great noble piece of legislation. As president, I will fight for it and I hope many of you will be with me when I sign it.”

Watch highlights from the speech and the full video below it: