As expected Democratic presidential candidate and former first lady Hillary Clinton showed up on SNL. Clinton played a bartender named Val forced to listen to Hillary Clinton (as played by Kate McKinnon) pour her heart out about the 2016 presidential race over a “scalding hot vodka.”

Clinton and McKinnon knocked it out of the park in a sketch that includes a bit of Donald Trump mockery, and even Bill shows up at one point.

“Why won’t the people just let me lead? Give me the hammer and nails and let me fix it all?”, McKinnon’s Hillary wails at the beginning of the sketch. 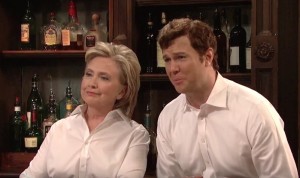 Soon she’s joined by Val, and a bar patron who interrupts their conversation:

Bar Patron: “Hi Mrs Clinton, I’m sorry to interrupt. I just wanted to say my sister’s gay, so thanks for all you’ve done for gay marriage.”

Val (Clinton): It really is great how long you supported gay marriage.

Clinton (McKinnon): Yes. I could have supported it sooner.

Val (Clinton): Well you did it pretty soon.

Clinton (McKinnon): It could have been sooner.

Trump had something to say about her performance:

But Hillary won the night:

A vote for Hillary is a vote for four more years of Kate McKinnon's impression. #citizens pic.twitter.com/8WFlf1dy9n