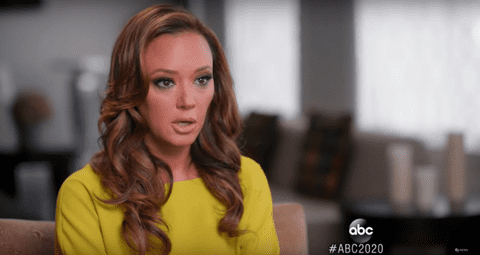 In a lengthy new interview, actress Leah Remini is opening up about her decision to leave the Church of Scientology as well as her experience with Scientology poster boy Tom Cruise and his ex-wife Katie Holmes.

In her full interview, which aired last night on 20/20, Remini said that Cruise, Holmes and others in the Church accused her of ruining “the wedding of the century”, aka Cruise’s marriage to Holmes in 2006. Remini shared a Church document known as a “Knowledge Report” that she says Holmes wrote about her after the wedding:

“It starts with, ‘I was dismayed at the behavior of Leah Remini during the events leading up to our wedding … At the wedding, the behavior as a guest, a friend … was very upsetting,’” Remini said, reading the document.

Remini says she was then sent away to a Church facility for “reprogramming.”

Remini was critical of Cruise during her time in the Church, particularly surround his at-times erratic behavior circa 2006-2007:

“I’m saying, ‘I don’t think he’s becoming of a Scientologist, jumping on couches, and attacking Matt Lauer… and attacking Brooke Shields,’” Remini said. “Like… ‘What the hell is this guy doing?’ … we need to rein it in, we need to stop all this, and he just needs to be an actor.”

But after she spoke out about Cruise’s actions, Remini said she “was immediately dealt with,” saying she was taught that “the only reason you’re saying these things is because you have your own transgressions.”

Holmes has since divorced Cruise and left Scientology, something Remini felt vindicated her. Holmes released a statement to ABC News saying, “I regret having upset Leah in the past and wish her only the best in the future.” Remini said she was “touched” by Holmes’ statement.

Ultimately, Remini says she doesn’t regret what she has been through:

“I don’t regret spending my life there, because it really did teach me a lot … and because we’ve all survived it, we’re all surviving it and living life and it’s kind of like we have a gift of second chance of life.”

Watch the full interview from ABC News, in which Remini details some of the “crazy s**t” Scientologists believe, below: