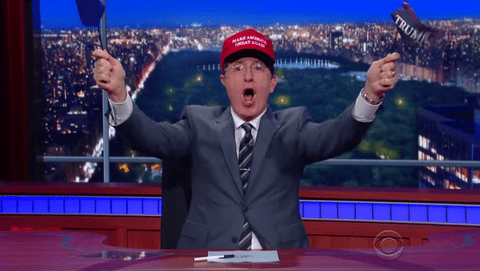 Colbert highlighted the moderators’ well-reported ineptitude — “What the moderators lacked in courtesy they made up for in lack of preparation” — as well as some of the more ridiculous moments of the debate. For instance, when Ted Cruz said he probably isn’t the kind of guy you’d want to grab a beer with, but he is a good designated driver. Colbert suggested Cruz change his campaign slogan to: “Ted Cruz 2016: Get in the car.”

Colbert even had some praise for Donald Trump, whose “negotiations” with CNBC cut the debate length down from 3 1/2 hours to 2:

“Donald, you saved us from another hour and a half of that debate. You are truly a great leader. And you have earned my vote as long…as you can negotiate your presidency down from four years to, you know, two hours feels about right.”

As for the hullaballoo about the dressing room situation — higher polling candidates got plush rooms whereas lower tier candidates like Chris Christie got stuck with “a toilet in a closet” — Colbert suggests there could be good reason for that: “The RNC might have just wanted Chris Christie to be closer to where his campaign has gone. ”

Watch Colbert skewer everyone, below: