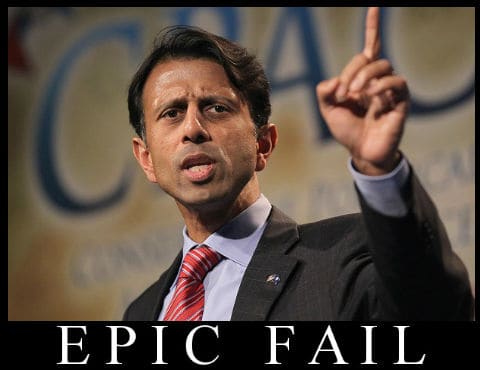 Anti-gay Louisiana Governor Bobby Jindal suspended his campaign for the presidency on Tuesday. Jindal had failed to make the main stage debate at any of the Republican Party’s debates so far this election cycle, being relegated to the “undercard” or “kid’s table” debate due to anemic national polling numbers.

In a statement, Jindal said “this is not my time.”

Jindal had struggled to gain traction in the race, often failing to poll at even 1 percent in some surveys. He also underwhelmed in the money race, and had just $261,000 in the bank heading into October. […]

Jindal said he would go back to work at his think tank, America Next.

Jindal is the third candidate to exit the race for the GOP nomination following in the footsteps of Scott Walker and Rick Perry.