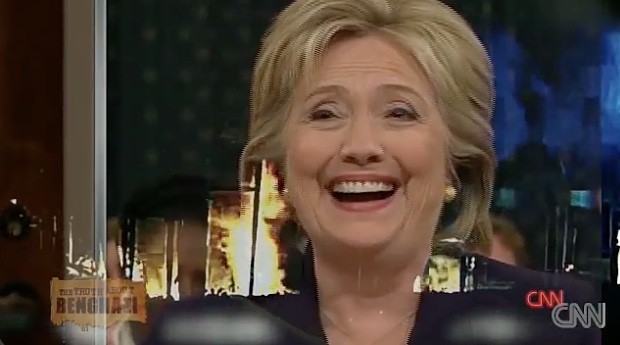 Donald Trump posted video today to his Instagram account which features a laughing Hillary Clinton superimposed over an image of Benghazi up in flames.

“Hillary has been having a laugh at our expense for years,” says text on the beginning of the clip as a montage of Clinton scandals rolls by. It ends with the text,  “Hillary, there is nothing to laugh about.”

Meanwhile, CNN reports on a new poll which shows that Americans trust Clinton over any of the leading GOP candidates to deal with the threat of terror:

The Democratic front-runner leads most of the GOP candidates by a wide margin, and tops GOP front-runner Donald Trump by 8 points and second-place Ben Carson by 9 points.

The closest gap is with former Florida Gov. Jeb Bush, who is within the margin of error of Clinton, with Clinton at 46% and Bush at 43%.