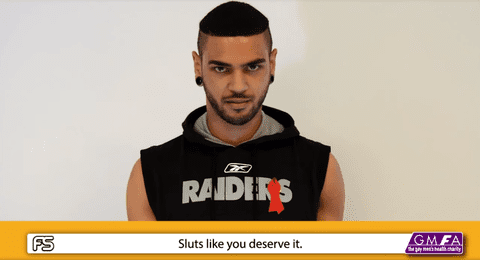 A new video from London-based gay men’s healthy charity GMFA tackles stigma associated with being HIV-positive in the world of gay hook-up apps.

GMFA asked a group of guys to read actual messages HIV-positive men received on hook-up apps and share their responses to them. The messages sent show how ugly stigma can be. HIV shaming was doled out in a wide range of hateful messages that included,

“I wouldn’t want anything to do with an ugly pile of HIV like you.”

“…teaches you to stop being a slut”

Far from being just mean-spirited, messages like these have real world consequences for gay men and the LGBT community at large. One reader remarked,

“One thing that does concern me is that for a lot of guys that have just been diagnosed, and can’t speak to their family, friends, partner or anyone else. Sometimes a hook-up app is the only connection that they’re having. To disclose their status, and have that be the response they’re met with – it’s potentially really damaging.”

Of broader implications, one guy said,

“Each time someone sends a message like this to an HIV guy it adds a brick to the viral closet. Next time someone challenges them about their status they might deny it. They might lie. And things happen.”

Watch the guys read and react to all the messages below:

Previous Post: « Student Sues Chinese Government Over Textbook Labeling Homosexuality a ‘Sick Addiction’
Next Post: People From Around The World Answer, ‘What Would You Do If Your Child Was Gay?’ – WATCH »