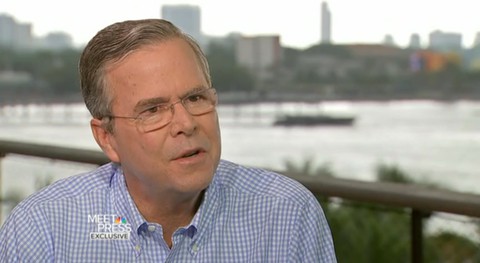 On Sunday’s Meet The Press, Jeb Bush spoke with Chuck Todd about his campaign and addressed his lackluster performance at last week’s GOP debate.

Asked if he had re-watched the debate, he said he hadn’t but admitted that he needed to improve his performance during his party’s primary debates:

“I know I gotta get better at doing the debate,” Bush said. “I’m a grinder. I mean, when I see that I’m not doing something well then I reset and I get better, and I’m going to get better.”

“This is not debating. I mean, whatever it’s called, it’s not debating. Because I can complete a sentence in the English language pretty well, and I have ideas that can lift people up.”

Bush’s remark about his ability to “complete a sentence in the English language” is notable given the frequent criticism his brother received during his tenure as President for what many perceived as his bungling of the “English language.”

Watch Jeb’s interview, which turns to his debate performance at the 2:02 mark, below: